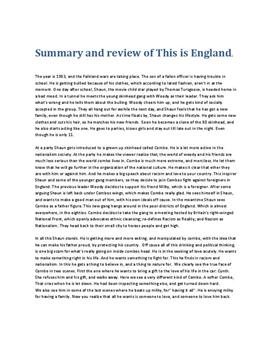 This is England Zusammenfassung

The year is 1983, and the Falkland wars are taking place. The son of a fallen officer is having trouble in school. He is getting bullied because of his clothes, which according to latest fashion, aren’t in at the moment. One day after school, Shaun, the movie child star played by Thomas Tursgoose, is headed home in a bad mood. In a tunnel he meets the young skinhead gang with Woody as their leader. They ask him what’s wrong and he tells them about the bulling. Woody cheers him up, and he gets kind of socially accepted in the group. They all hang out for awhile the next day, and Shaun feels that he has got a new family, even though he still has his mother. As time floats by, Shaun changes his lifestyle. He gets some new clothes and cuts his hair, so he matches his new friends. Soon he becomes a clone of the 80 skinhead, and he also starts acting like one. He goes to parties, kisses girls and stay out till late out in the night. Even though he is only 11... Kaufen Sie jetzt Zugang, um mehr zu lesen Schon registriert als Abonnent? Bitte einloggen