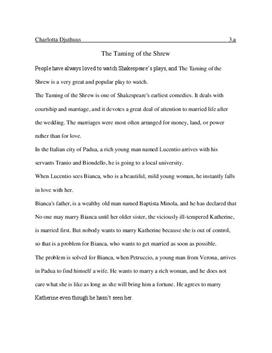 The Taming of the Shrew Zusammenfassung und Analyse

"The Taming of the Shrew is one of Shakespeare's earliest comedies. It deals with courtship and marriage, and it devotes a great deal of attention to married life after the wedding. The marriages were most often arranged for money, land, or power rather than for love.
In the Italian city of Padua, a rich young man named Lucentio arrives with his servants Tranio and Biondello, he is going to a local university.
When Lucentio sees Bianca, who is a beautiful, mild young woman, he instantly falls in love with her.
Bianca's father, is a wealthy old man named Baptista Minola, and he has declared that
No one may marry Bianca until her older sister, the viciously ill-tempered Katherine, is married first. But nobody wants to marry Katherine because she is out of control, so that is a problem for Bianca, who wants to get married as soon as possible..."... Kaufen Sie jetzt Zugang, um mehr zu lesen Schon registriert als Abonnent? Bitte einloggen