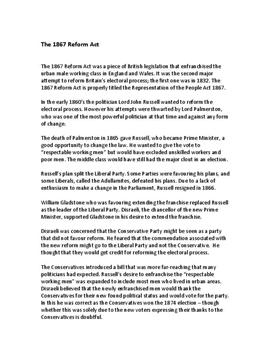 The 1867 Reform Act was a piece of British legislation that enfranchised the urban male working class in England and Wales. It was the second major attempt to reform Britain’s electoral process; the first one was in 1832. The 1867 Reform Act is properly titled the Representation of the People Act 1867.

In the early 1860’s the politician Lord John Russell wanted to reform the electoral process. However his attempts were thwarted by Lord Palmerston, who was one of the most powerful politician at that time and against any form of change... Kaufen Sie jetzt Zugang, um mehr zu lesen Schon registriert als Abonnent? Bitte einloggen