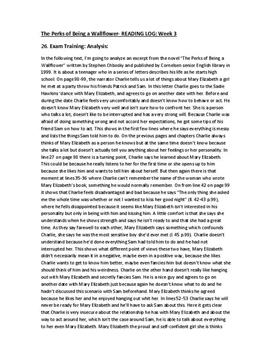 The Perks of Being a Wallflower - Analyse

In the following text, I'm going to analyze an excerpt from the novel “The Perks of Being a Wallflower” written by Stephen Chbosky and published by Cornelsen senior English library in 1999. It is about a teenager who in a series of letters describes his life as he starts high school. On page 98-99, the narrator Charlie tells us a lot of things about Mary Elizabeth a girl he met at a party throw his friends Patrick and Sam. In this letter Charlie goes to the Sadie Hawkins ‘dance with Mary Elizabeth, and agrees to go on another date with her. Before and during the date Charlie feels very uncomfortably and doesn't know how to behave or act. He doesn't know Mary Elizabeth very well and isn't sure how to confront her. She is a person who talks a lot, doesn't like to be interrupted and has a very strong will. Because Charlie was afraid of doing something wrong and not accord her expectations, he got some tips of his friend Sam on how to act.

This shows in the first few lines where he says everything is messy and lists the things Sam told him to do. On the previous pages and chapters Charlie always thinks of Mary Elizabeth as a person he knows but at the same time doesn't know because she talks a lot but doesn't actually tell you anything about her feelings or her personality. In line 27 on page 98 there is a turning point, Charlie says he learned about Mary Elizabeth. This could be because he really listens to her for the first time or she opens up to him because she likes him and wants to tell him about herself. But then again there is that moment at lines 35-36 where Charlie can't remember the name of the woman who wrote Mary Elizabeth's book, something he would normally remember.

On from line 42 on page 99 it shows that Charlie feels disadvantaged and bad because he says “The only thing she asked me the whole time was whether or not I wanted to kiss her good night” (ll. 42-43 p.99), where he fells disappointed because it seems like Mary Elizabeth isn't interested in his personality but only in being with him and kissing him... Kaufen Sie jetzt Zugang, um mehr zu lesen Schon registriert als Abonnent? Bitte einloggen