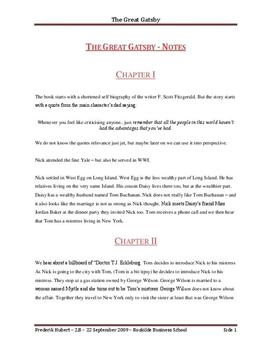 The book starts with a shortened self biography of the writer F. Scott Fitzgerald. But the story starts with a quote from the main character’s dad saying:

Whenever you feel like criticising anyone.. just remember that all the people in this world haven’t had the advantages that you’ve had.

We do not know the quotes relevance just jet, but maybe later on we can use it into perspective.

Nick attended the fine Yale – but also he served in WWI.

Nick settled in West Egg on Long Island. West Egg is the less wealthy part of Long Island. He has relatives living on the very same Island. His cousin Daisy lives there too, but at the wealthier part. Daisy has a wealthy husband named Tom Buchanan. Nick does not really like Tom Buchanan – and it also looks like the marriage is not as strong as Nick thought. Nick meets Daisy’s friend Miss Jordan Baker at the dinner party they invited Nick too. Tom receives a phone call and we then hear that Tom has a mistress living in New York... Kaufen Sie jetzt Zugang, um mehr zu lesen Schon registriert als Abonnent? Bitte einloggen