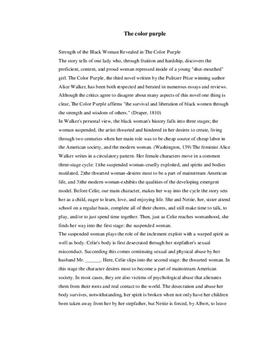 "Strength of the Black Woman Revealed in The Color Purple
The story tells of one lady who, through fruition and hardship, discovers the proficient, content, and proud woman repressed inside of a young "shut-mouthed" girl. The Color Purple, the third novel written by the Pulitzer Prize winning author Alice Walker, has been both respected and berated in numerous essays and reviews. Although the critics agree to disagree about many aspects of this novel one thing is clear, The Color Purple affirms "the survival and liberation of black women through the strength and wisdom of others." (Draper, 1810). In Walker's personal view, the black woman's history falls into three stages; the woman suspended, the artist thwarted and hindered in her desires to create, living through two centuries when her main role was to be cheap source of cheap labor in the American society, and the modern woman..."... Kaufen Sie jetzt Zugang, um mehr zu lesen Schon registriert als Abonnent? Bitte einloggen