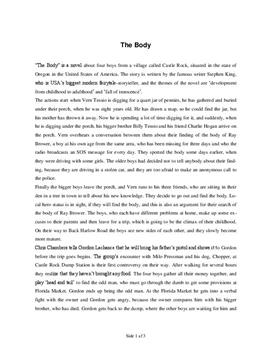 “The Body” is a novel about four boys from a village called Castle Rock, situated in the state of Oregon in the United States of America. The story is written by the famous writer Stephen King, who is USA’s biggest modern fairytale-storyteller, and the themes of the novel are ‘development from childhood to adulthood’ and ‘fall of innocence’.
The actions start when Vern Tessio is digging for a quart jar of pennies, he has gathered and buried under their porch, when he was eight years old. He has drawn a map, so he could find the jar, but his mother has thrown it away. Now he is spending a lot of time digging for it, and suddenly, when he is digging under the porch, his bigger brother Billy Tessio and his friend Charlie Hogan arrive on the porch... Kaufen Sie jetzt Zugang, um mehr zu lesen Schon registriert als Abonnent? Bitte einloggen