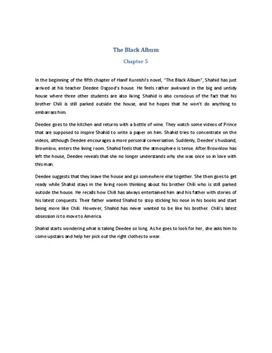 "In the beginning of the fifth chapter of Hanif Kureishi's novel, ”The Black Album”, Shahid has just arrived at his teacher Deedee Osgood's house. He feels rather awkward in the big and untidy house where three other students are also living. Shahid is also conscious of the fact that his brother Chili is still parked outside the house, and he hopes that he won't do anything to embarrass him..."... Kaufen Sie jetzt Zugang, um mehr zu lesen Schon registriert als Abonnent? Bitte einloggen