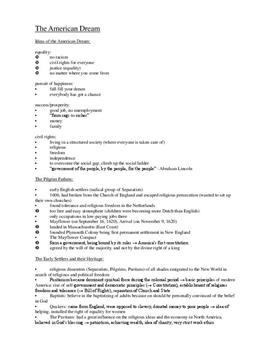 early English settlers (radical group of Separatists)
1606, had broken from the Church of England and escaped religious persecution (wanted to set up their own churches)
found tolerance and religious freedom in the Netherlands
too free and easy atmosphere (children were becoming more Dutch than English)
only occupations in low-paying jobs there
Mayflower (on September 16, 1620), Arrival (on November 9, 1620)
landed in Massachusetts (East Coast)
founded Plymouth Colony being first permanent settlement in New England
The Mayflower Compact
form a government, being bound by its rules → America's first constitution
agreed by the will of the majority, and not by the divine right of a king... Kaufen Sie jetzt Zugang, um mehr zu lesen Schon registriert als Abonnent? Bitte einloggen