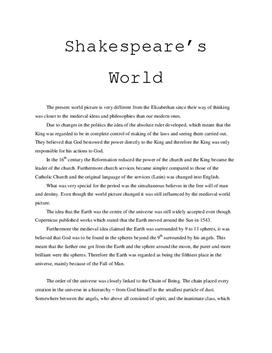 In the 16th century the Reformation reduced the power of the church and the King became the leader of the church. Furthermore church services became simpler compared to those of the Catholic Church and the original language of the services (Latin) was changed into English.

What was very special for the period was the simultaneous believes in the free will of man and destiny. Even though the world picture changed it was still influenced by the medieval world picture.
The idea that the Earth was the centre of the universe was still widely accepted even though Copernicus published works which stated that the Earth moved around the Sun in 1543.... Kaufen Sie jetzt Zugang, um mehr zu lesen Schon registriert als Abonnent? Bitte einloggen