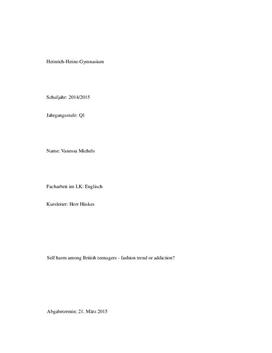 Self harm among British teenagers: fashion trend or addiction? - Facharbeit

Introduction
Self-harm, or self-injurious behaviour, SIB for short, is a worldwide, in particular upon teenagers, very often appearing behaviour, which describes the deliberate damage of the own body.
SIB is not defined as an own clinical picture, but appears as a symptom of different mental disorders . These are for instance “ Depressions, traumatisation, borderline personality disorder (BDP), Anxiety disorders, Eating disorders, Obsessive–compulsive disorders, drug- and alcohol dependencies and multiple personality disorders (MPD)” .
However, the term 'self-harm', which is commonly known as 'cutting', is often prejudged as a consequence of a lack of enlightenment.In this research paper I will particularly address myself to the explanation of the term of self harm, but also to the answer of the question why so many teenagers do so.

1. SIB (self-injurious behaviour) – asking for the reason
Many people have once before heard about self-injurious behaviour, but do often not know what it really means. The fact that there are different manifestations, is often unclear, which is why a result is that witnesses make a distinction not between affected persons, but “pigeon-hole” everyone.
Another problem is that outsiders cannot often understand the behaviour of affected persons what can be also seen as a result of lacking information on this subject.
In the following chapter I will react to the aforesaid question after the reason for such a behaviour.

1.1 Definition
Self-harm or self-injurious behaviour is not only defined as the common “cutting”. A distinction is made between different forms of self-harm where these are featured in a direct as well as in an indirect form . In contradistinction to the direct form, the line with the indirect form to the normal range is elusive. The refusal of ingestion and imbibition may be considered, for example, just as hazardous behaviour in sport, as an indirect form of self-injurious behaviour, although it must not imperatively be felt as a consciously and intentional behaviour with the intention to feel pain. It is different with the direct form of self-harm, which can have many different faces. An example for direct or self-inflicted violence is the so-called “cutting”, which denotes the cutting of the own skin through razor blades, knives, shards and much more, but also the intentional burning of the own skin, by instance through the laying on of hands on a torrid hotplate as well as biting oneself or “ramming one's head against a wall” .
Therefore, the direct or self-inflicted violence is indeed the better known and more frequent form of SIB, but not the only one.

1.2. “Why do they do that?”
The question of “why” arises with the subject of self-injury very often and is not only to outsiders, but also to those affected very difficult to clarify.
Self-injury is a result of grave, negative, preceded events, which is why it is as a rule no search for bare attention. One makes a distinction, on this occasion, between risk factors and triggers. Self-injury often appears with youngsters between the age of 14 and 18 years, so in the middle of puberty. This is a very awkward and difficult phase, but as SIB is does not only occur with teenagers at this age, one can not name this as the only reason for such a behaviour . There are factors which raise the risk of an autoaggressive behaviour. Negative experiences of life like bullying, traumas and familiar conflicts, as well as mental issues like depressions and eating disturbances belong to these risk factors . At this it once more becomes apparent that SIB does never occur alone, but as a symptom of a mental illness. Another factor which is decisively involved in the act of self harm is a trigger. “Trigger” is the technical term for a trippet and therefore denotes an event just before the act of self harm, which sparks off the subsequent reaction. So we can say that there is indeed, in most cases, an explanation for autoaggressive behaviour.
Now, nevertheless, the question arises what is going on inside of a person who does want to hurt itself. With the act of the self-injury experts speak of a dissociation or a self-alienation. This means that the affected persons are at the moment of the self-injury like in a sort of trance and indeed perceive the events, but however, not completely... Kaufen Sie jetzt Zugang, um mehr zu lesen Schon registriert als Abonnent? Bitte einloggen