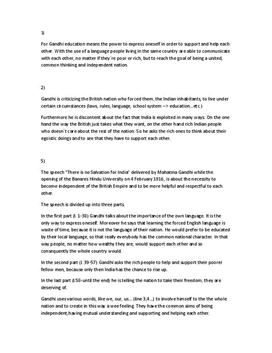 Redeanalyse There is no Salvation for India

The speech “There is no Salvation for India” delivered by Mahatma Gandhi while the opening of the Banares Hindu University on 4 February 1916, is about the necessity to become independent of the British Empire and to be more helpful and respectful to each other.
The speech is divided up into three parts.
In the first part (l. 1-38) Gandhi talks about the importance of the own language. It is the only way to express oneself. Moreover he says that learning the forced English language is waste of time, because it is not the language of their nation... Kaufen Sie jetzt Zugang, um mehr zu lesen Schon registriert als Abonnent? Bitte einloggen