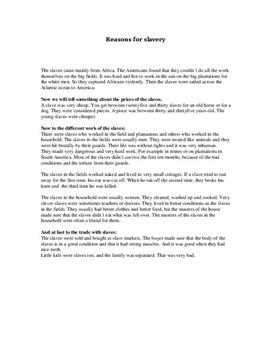 The slaves came mainly from Africa. The Americans found that they couldn´t do all the work themselves on the big fields. It was hard and hot to work in the sun on the big plantations for the white men. So they captured Africans violently. Then the slaves were sailed across the Atlantic ocean to America.

Now we will tell something about the prices of the slaves.
A slave was very cheap. You get between twentyfive and thirty slaves for an old horse or for a dog. They were considered pieces. A piece was between thirty and thirtyfive years old. The young slaves were cheaper... Kaufen Sie jetzt Zugang, um mehr zu lesen Schon registriert als Abonnent? Bitte einloggen