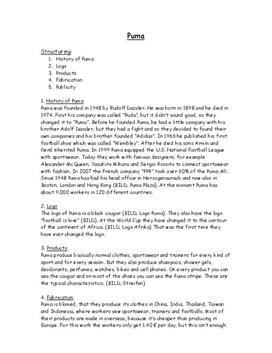 1. History of Puma
Puma was founded in 1948 by Rudolf Dassler. He was born in 1898 and he died in 1974. First his company was called “Ruda”, but it didn't sound good, so they changed it to “Puma”. Before he founded Puma, he had a little company with his brother Adolf Dassler, but they had a fight and so they decided to found their own companies and his brother founded “Adidas”. In 1966 he published his first football shoe which was called “Wembley”. After he died his sons Armin and Gerd inherited Puma. In 1999 Puma equipped the U.S. National Football League with sportswear. Today they work with famous designers, for example Alexander McQueen, Yasuhiro Mihara and Sergio Rossito to connect sportswear with fashion... Kaufen Sie jetzt Zugang, um mehr zu lesen Schon registriert als Abonnent? Bitte einloggen