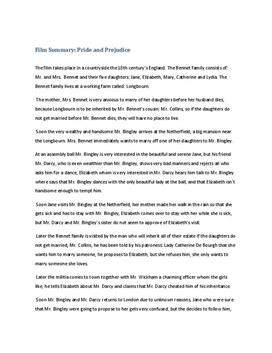 The film takes place in a countryside the 18th century’s England. The Bennet family consists of: Mr. and Mrs. Bennet and their five daughters: Jane, Elizabeth, Mary, Catherine and Lydia. The Bennet family lives at a working farm called: Longbourn.
The mother, Mrs. Bennet is very anxious to marry of her daughters before her husband dies, because Longbourn is to be inherited by Mr. Bennet’s cousin: Mr. Collins, so if the daughters do not get married before Mr. Bennet dies, they will have no place to live.
Soon the very wealthy and handsome Mr. Bingley arrives at the Netherfield; a big mansion near the Longbourn. Mrs. Bennet immediately wants to marry off one of her daughters to Mr. Bingley... Kaufen Sie jetzt Zugang, um mehr zu lesen Schon registriert als Abonnent? Bitte einloggen