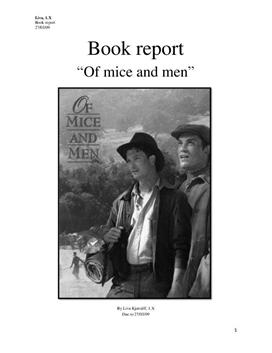 Of Mice and Men Characters

The key characters in the novel are George and Lennie.
Lennie: Lennie is a large and strong migrant worker that because of his mental disability completely depends on George. His mental disability makes him childlike and on others it makes him seem stupid. He is sweet and kind and could never hurt someone on purpose, but he doesn’t know his own strength, and therefore his meant to be kind touch can sometimes cause him unwittingly to do harm on animals and people. Lennie share a vision with George of a farm that they will own together, a vision that Lennie believes in wholeheartedly. Lennie, however, is helpless to attain his dream, and rely on George to fuel his hope and save him from trouble... Kaufen Sie jetzt Zugang, um mehr zu lesen Schon registriert als Abonnent? Bitte einloggen