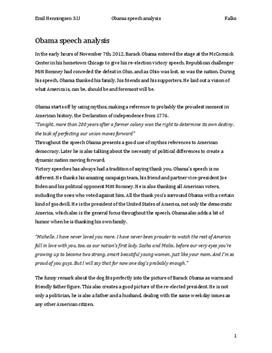 Obama starts off by using mythos, making a reference to probably the proudest moment in American history, the Declaration of independence from 1776.
“Tonight, more than 200 years after a former colony won the right to determine its own destiny, the task of perfecting our union moves forward”
Throughout the speech Obama presents a good use of mythos references to American democracy. Later he is also talking about the necessity of political differences to create a dynamic nation moving forward.
Victory speeches has always had a tradition of saying thank you, Obama’s speech is no different. He thanks his amazing campaign team, his friend and partner vice-president Joe Biden and his political opponent Mitt Romney. He is also thanking all American voters, including the ones who voted against him. All the thank you’s surround Obama with a certain kind of goodwill. He is the president of the United States of America, not only the democratic America, which also is the general focus throughout the speech. Obama also adds a bit of humor when he is thanking his own family... Kaufen Sie jetzt Zugang, um mehr zu lesen Schon registriert als Abonnent? Bitte einloggen