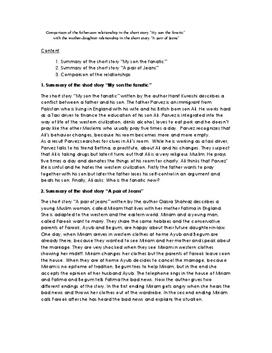 My son the fanatic & A pair of Jeans Vergleich

Vergleich von 2 Kurzgeschichten namens "A pair of Jeans" und "My son the fanatic" aus der BW-Abilektüre One "Language Many Voices".

3. Comparison of the relationships
At the beginning of the story, the father-son relationship between Ali and his father Parvez is normal like in other families, because the father does everything to be able to afford a good life for his son. Firstly, Ali behaves like a well-educated teenager: He plays guitar, does an education as an accountant and is happy to have such a good father. Everything seems to be fine but then with the change of Ali the father-son relationship changes as well. Ali has suddenly no respect for his father anymore, because they have a different view of culture and religion. Ali is angry that Parvez doesn't behave like a Moslem and Parvez still loves his son but he doesn't understand his new behavior... Kaufen Sie jetzt Zugang, um mehr zu lesen Schon registriert als Abonnent? Bitte einloggen