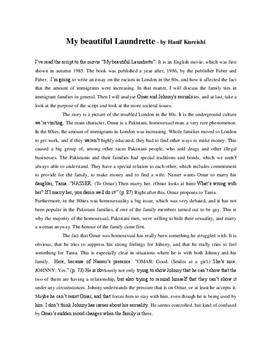 The story is a picture of the troubled London in the 80s. It is the underground culture we’re visiting. The main character, Omar is a Pakistani, homosexual man, a very rare phenomenon. In the 80ies, the amount of immigrants in London was increasing. Whole families moved to London to get work, and if they weren’t highly educated, they had to find other ways to make money. This caused a big group of, among other races Pakistani people, who sold drugs and other illegal businesses... Kaufen Sie jetzt Zugang, um mehr zu lesen Schon registriert als Abonnent? Bitte einloggen