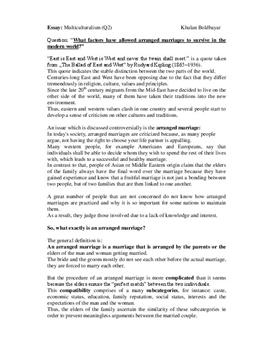 Question: “What factors have allowed arranged marriages to survive in the modern world?”

“East is East and West is West and never the twain shall meet.” is a quote taken from „The Ballad of East and West“ by Rudyard Kipling (1865–1936).
This quote indicates the stable distinction between the two parts of the world.
Centuries-long East and West have been opposing due to the fact that they differ tremendously in religion, culture, values and principles.
Since the late 20th century migrants from the Mid-East have decided to live on the other side of the world, many of them have taken their traditions into the new environment... Kaufen Sie jetzt Zugang, um mehr zu lesen Schon registriert als Abonnent? Bitte einloggen