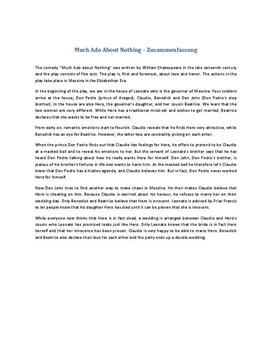 Much Ado About Nothing Zusammenfassung

The comedy ”Much Ado about Nothing” was written by William Shakespeare in the late sixteenth century and the play consists of five acts. The play is, first and foremost, about love and honor. The actions in the play take place in Messina in the Elizabethan Era.
In the beginning of the play, we are in the house of Leonato who is the governor of Messina. Four soldiers arrive at the house; Don Pedro (prince of Aragon), Claudio, Benedick and Don John (Don Pedro’s step brother). In the house are also Hero, the governor’s daughter, and her cousin Beatrice. We learn that the two women are very different. While Hero has a traditional mind-set and wishes to get married, Beatrice declares that she wants to be free and not married... Kaufen Sie jetzt Zugang, um mehr zu lesen Schon registriert als Abonnent? Bitte einloggen