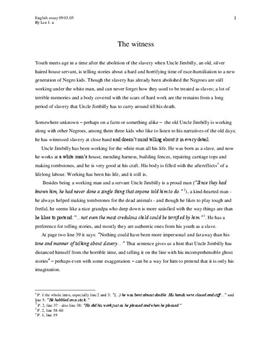 The title refers to Uncle Jimbilly’s situation: He witnessed slavery at close hand. It also tells us that he wasn’t tortured himself; he was a witness, not a victim. But standing by the sideline passively watching his friends be humiliated, tortured, and killed, just doing nothing must have been really hard on him. On page two line 52-56 where he describes what the white men did to the slaves in the rice swamps he says: “…you could hear’em howlin’ an prayin all over the swamp.”. Those acts have obviously made a big impression on Uncle Jimbilly. I imagine how he must have been listening to the screams with horror painted on his face, trying to cover his ears... Kaufen Sie jetzt Zugang, um mehr zu lesen Schon registriert als Abonnent? Bitte einloggen