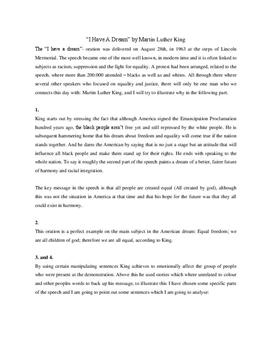 I Have a Dream Redeanalyse

The “I have a dream”- oration was delivered on August 28th, in 1963 at the steps of Lincoln Mermorial. The speech became one of the most well known, in modern time and it is often linked to subjects as racism, suppression and the fight for equality. A protest had been arranged, related to the speech, where more than 200.000 attended – blacks as well as and whites. All through there where several other speakers who focused on equality and justice, there will only be one man who we connects this day with: Martin Luther King, and I will try to illustrate why in the following part... Kaufen Sie jetzt Zugang, um mehr zu lesen Schon registriert als Abonnent? Bitte einloggen