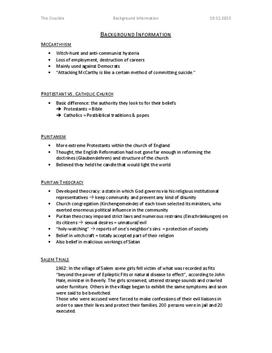 Salem Trials
1962: In the village of Salem some girls fell victim of what was recorded as fits “beyond the power of Epileptic Fits or natural disease to effect”, according to John Hale, minister in Beverly. The girls screamed, uttered strange sounds and crawled under furniture. Others in the village began to exhibit the same symptoms and soon were said to be bewitched.
Those who were accused were forced to make confessions of their evil liaisons in order to save their lives and protect their families. 200 persons were in jail and 20 executed... Kaufen Sie jetzt Zugang, um mehr zu lesen Schon registriert als Abonnent? Bitte einloggen