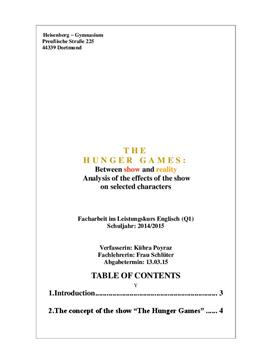 This work is about the dystopian1 novel “The Hunger Games” and concentrating mainly on the analysis of the effect of the show on selected characters and the question if it's either show or reality. The novel “The Hunger Games” was published as the first book in a trilogy in 2008, followed up by “Catching Fire” (2009) and “Mockingjay” (2010), by Suzanne Collins2 . The trilogy has been wildly successful and confronts the reader with a post-apocalyptic version of North America.3
I choose the topic “The Hunger Games: between show and reality, analysis of the effect of the show on selected characters”, because I am convinced that every human being has empathized with fictional characters in books and movies or with “real” people in reality television and caught in thoughts about, if this could be real or not, even better, could this be them in other circumstances? Everyday we are confronted with shows and reality television, but how thin is the line between show and reality indeed?
What for a fact is reality, that nowadays, it's hard to distinguish from what you think you believe and what other people, the media, the society wants you to believe. We live of the pressure of the high society, we are influenced by the high society, even though it could be subconsciousness or consciousness4. The high society are the people who hide behind their power and money, and use people like their chess pieces for their own advantage; to force their opinion of the “right view” to ingenuous people. Which leeds me back to my main topic...

Suzanne Collins' idea for the books of the Hunger Games series started in a young age from the myth of Theseus and the Minotaur5, which affirmed her fondness of Greek and Roman Mythology. The Greek Mythology of Theseus and the Minotaur choose seven young men and seven young women every year from Athen, who -likewise in “The Hunger Games”- were sent away from their family, to an underground labyrinth, whereas the first “tributes” were haunted and killed by the Minotaur monster.6
“As punishment for Displeasing Crete, Athens periodically had to send seven youths and seven maidens to Crete, where they were thrown into the labyrinth and devoured by the Minotaur, which is a monster that's half man and half bull. Even when I was a little kid, the story took my breath away, because it was so cruel, and Crete was so ruthless.”- Suzanne Collins7
The author of the “The Hunger Games” trilogy, was emotional influenced by the events of the Roman and Greek Mythology, even though in a young age people always connect events in the past with the here and now. In addition to that, the idea of “The Hunger Games” came from watching reality television, reading war coverage, her father fought in the Vietnam war, and influencing from the times of gladiator battles.8 The similarity of the Hunger Games to the gladiatorial games are also resembling due to the fact that the word panem is Latin for “bread”, it recalls “bread and circuses.”9Above all Suzanne Collins also says that people should differentiate between watching a sitcom or a real-life tragedy in the news, because the people in reality television or news are indeed real people on the screen, and they're not going away when the commercials start to roll.10 Like it is in the “Panem” world... Kaufen Sie jetzt Zugang, um mehr zu lesen Schon registriert als Abonnent? Bitte einloggen