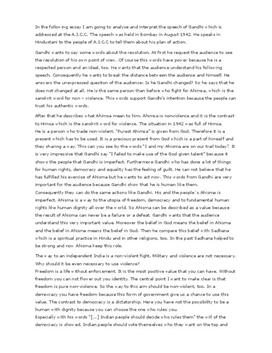 In the following essay I am going to analyse and interpret the speech of Gandhi which is addressed at the A.I.C.C. The speech was held in Bombay in August 1942. He speaks in Hindustani to the people of A.I.C.C to tell them about his plan of action.
Gandhi wants to say some words about the resolution. At first he request the audience to see the resolution of his own point of view. Of course this words have power because he is a respected person and an ideal, too. He wants that the audience understand his following speech. Consequently he wants to break the distance between the audience and himself. He answers the unexpressed question of the audience: Is he Gandhi changed?... Kaufen Sie jetzt Zugang, um mehr zu lesen Schon registriert als Abonnent? Bitte einloggen