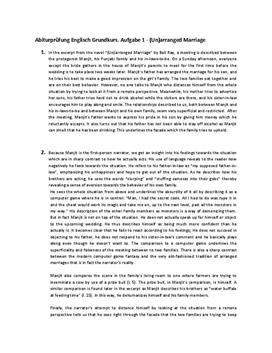 1. Describe the situation and the relationships presented in the extract.

2. Analyse Manjit's reaction to the meeting and the way he describes it. Consider narrative perspective, use of language and the interaction between the characters.

3.3 Later that evening, Manjit sees Lisa at her house. Her parents, who are liberal and open-minded intellectuals, are also present. They talk about Manjit's options. Write their conversation.

1. In the excerpt from the novel “(Un)arranged Marriage” by Bali Ray, a meeting is described between the protagonist Manjit, his Punjabi family and his in-laws-to-be. On a Sunday afternoon, everyone except the bride gathers in the house of Manjit's parents to meet for the first time before the wedding is to take place two weeks later. Manjit's father has arranged the marriage for his son, and he tries his best to make a good impression on the girl's family. The two families eat together and are on their best behavior. However, no one talks to Manjit who distances himself from the whole situation by trying to look at it from a remote perspective... Kaufen Sie jetzt Zugang, um mehr zu lesen Schon registriert als Abonnent? Bitte einloggen