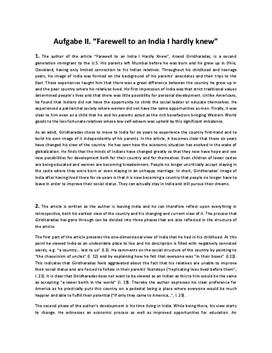 Englisch LK NRW Farewell to an India I Hardly Knew

1. Describe the author's family background and his changing images of India.

2. Analyse the author's view of India. Take into consideration content, structure and language.

3.2 One of Anand Giridharadas' cousins has been living in India all his life. He writes a personal letter to Anand, in which he reflects on the question whether he, too, should emigrate to the USA or stay in India. Write his letter.

The author of the article “Farewell to an India I Hardly Knew”, Anand Giridharadas, is a second generation immigrant to the U.S. His parents left Mumbai before he was born and he grew up in Ohio, Cleveland, having only limited connection to his Indian relatives. Throughout his childhood and teenage years, his image of India was formed on the background of his parents' anecdotes and their trips to the East. These experiences taught him that there was a great difference between the country he grew up in and the poor country where his relatives lived. His first impression of India was that strict traditional values determined people's lives and that there was little possibility for personal development. Unlike Americans, he found that Indians did not have the opportunity to climb the social ladder or educate themselves... Kaufen Sie jetzt Zugang, um mehr zu lesen Schon registriert als Abonnent? Bitte einloggen