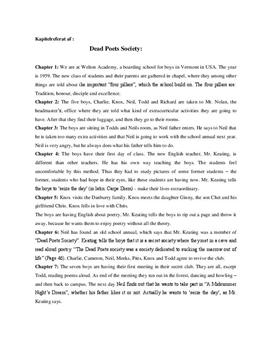 Chapter 3: The boys are sitting in Todds and Neils room, as Neil father enters. He says to Neil that he is taken too many extra activities and that Neil is going to work with the school annual next year. Neil is very angry, but he always does what his father tells him to do.
Chapter 4: The boys have their first day of class. The new English teacher, Mr. Keating, is different than other teachers. He has his own way teaching the boys. The students feel uncomfortable by this method. Thus they had to study pictures of some former students – the former, students who had hope in their eyes, like these students are having now. Mr. Keating tells the boys to ‘seize the day' (in latin: Carpe Diem) - make their lives extraordinary... Kaufen Sie jetzt Zugang, um mehr zu lesen Schon registriert als Abonnent? Bitte einloggen