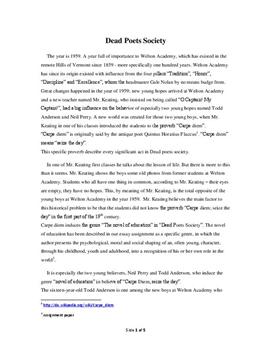 In one of Mr. Keating first classes he talks about the lesson of life. But there is more to this than it seems. Mr. Keating shows the boys some old photos from former students at Welton Academy. Students who all have one thing in common, according to Mr. Keating – their eyes are empty, they have no hopes. This, by meaning of Mr. Keating, is the total opposite of the young boys at Welton Academy in the year 1959. Mr. Keating believes the main factor to this historical problem to be that the students did not know the proverb “Carpe diem; seize the day” in the first part of the 19th century... Kaufen Sie jetzt Zugang, um mehr zu lesen Schon registriert als Abonnent? Bitte einloggen