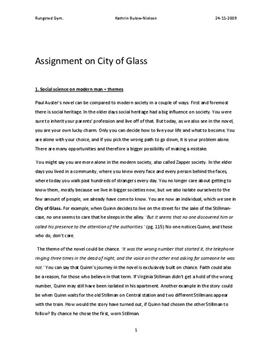 Our main character, Daniel Quinn, is a thirty-five year old writer who writes crime novels. He uses a cover name, William Wilson. ‘Because he did not consider himself to be the author of what he wrote, he did not feel responsible for it and therefore was not compelled to defend it in his heart. William Wilson, after all, was an invention, and even though he had been born within Quinn himself, he now led an independent life. Quinn treated him with deference, at times even admiration, but he never went so far as to believe that he and William Wilson were the same man.’ (pg. 4) I think that ever since he has become alone, he has tried to hide behind another identity to become a somebody again and escape his real life and the reason for his loneliness... Kaufen Sie jetzt Zugang, um mehr zu lesen Schon registriert als Abonnent? Bitte einloggen