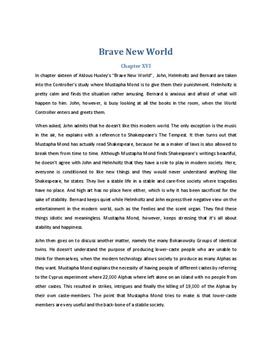 "In chapter sixteen of Aldous Huxley's “Brave New World”, John, Helmholtz and Bernard are taken into the Controller's study where Mustapha Mond is to give them their punishment. Helmholtz is pretty calm and finds the situation rather amusing. Bernard is anxious and afraid of what will happen to him. John, however, is busy looking at all the books in the room, when the World Controller enters and greets them.
When asked, John admits that he doesn't like this modern world. The only exception is the music in the air, he explains with a reference to Shakespeare's The Tempest. It then turns out that Mustapha Mond has actually read Shakespeare..."... Kaufen Sie jetzt Zugang, um mehr zu lesen Schon registriert als Abonnent? Bitte einloggen