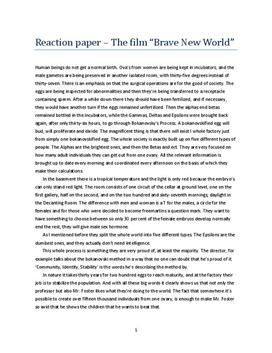 In the basement there is a tropical temperature and the light is only red because the embryo’s can only stand red light. The room consists of one circuit of the cellar at ground level, one on the first gallery, half on the second, and on the two hundred and sixty-seventh mornings, daylight in the Decanting Room. The difference with men and woman is a T for the males, a circle for the females and for those who were decided to become freemartins a question mark. They want to have something to choose between so only 30 percent of the female embryos develop normally end the rest, they will give male sex hormone... Kaufen Sie jetzt Zugang, um mehr zu lesen Schon registriert als Abonnent? Bitte einloggen