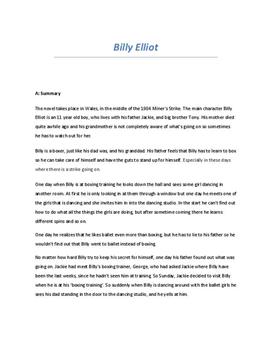 A: Summary
B: Characterization

Billy is a boxer, just like his dad was, and his granddad. His father feels that Billy has to learn to box so he can take care of himself and have the guts to stand up for himself. Especially in these days where there is a strike going on.
One day when Billy is at boxing training he looks down the hall and sees some girl dancing in another room. At first he is only looking in at them through a window but one day he meets one of the girls that is dancing and she invites him... Kaufen Sie jetzt Zugang, um mehr zu lesen Schon registriert als Abonnent? Bitte einloggen