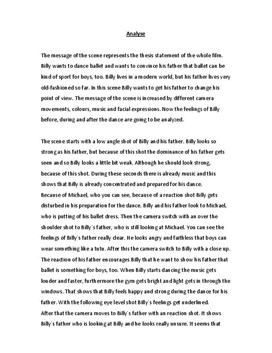 The message of the scene represents the thesis statement of the whole film. Billy wants to dance ballet and wants to convince his father that ballet can be kind of sport for boys, too. Billy lives in a modern world, but his father lives very old-fashioned so far. In this scene Billy wants to get his father to change his point of view. The message of the scene is increased by different camera movements, colours, music and facial expressions. Now the feelings of Billy before, during and after the dance are going to be analyzed... Kaufen Sie jetzt Zugang, um mehr zu lesen Schon registriert als Abonnent? Bitte einloggen