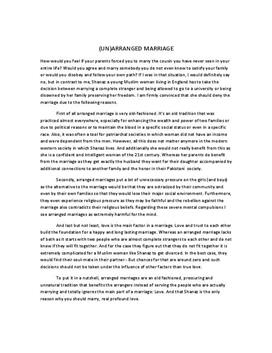 First of all arranged marriage is very old-fashioned. It's an old tradition that was practiced almost everywhere, especially for enhancing the wealth and power of two families or due to political reasons or to maintain the blood in a specific social status or even in a specific race. Also, it was often a tool for patriarchal societies in which woman did not have an income and were dependent from the men. However, all this does not matter anymore in the modern western society in which Shanaz lives. And additionally she would not really benefit from this as she is a confident and intelligent woman of the 21st century. Whereas her parents do benefit from the marriage as they get exactly the husband they want for their daughter accompanied by additional connections to another family and the honor in their Pakistani society.

Secondly, arranged marriages put a lot of unnecessary pressure on the girls (and boys) as the alternative to the marriage would be that they are ostracized by their community and even by their own families so that they would lose their major social environment. Furthermore, they even experience religious pressure as they may be faithful and the rebellion against the marriage also contradicts their religious beliefs. Regarding these severe mental compulsions I see arranged marriages as extremely harmful for the mind.

And last but not least, love is the main factor in a marriage. Love and trust to each other build the foundation for a happy and long lasting marriage. Whereas an arranged marriage lacks of both as it starts with two people who are almost complete strangers to each other and do not know if they will fit together.... Kaufen Sie jetzt Zugang, um mehr zu lesen Schon registriert als Abonnent? Bitte einloggen