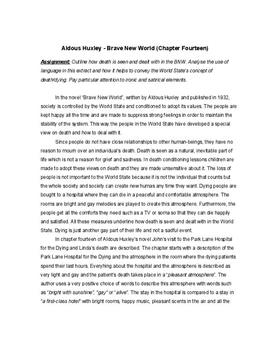 In the novel “Brave New World”, written by Aldous Huxley and published in 1932, society is controlled by the World State and conditioned to adopt its values. The people are
kept happy all the time and are made to suppress strong feelings in order to maintain the
stability of the system. This way the people in the World State have developed a special
view on death and how to deal with it.

Since people do not have close relationships to other human­beings, they have no
reason to mourn over an induvidual’s death. Death is seen as a natural, inevitable part of
life which is not a reason for grief and sadness. In death conditioning lessons children are
made to adopt these views on death and they are made unsensitive about it... Kaufen Sie jetzt Zugang, um mehr zu lesen Schon registriert als Abonnent? Bitte einloggen