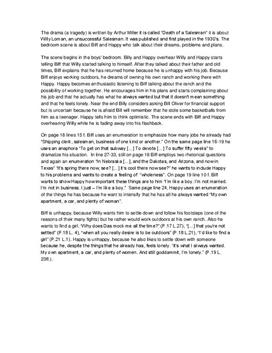 Analyse - Bedroomscene Death of a Salesman

The scene begins in the boys' bedroom. Billy and Happy overhear Willy and Happy starts telling Biff that Willy started talking to himself. After they talked about their father and old times, Biff explains that he has returned home because he is unhappy with his job. Because Biff enjoys working outdoors, he dreams of owning his own ranch and working there with Happy. Happy becomes enthusiastic listening to Biff talking about the ranch and the possibility of working together. He encourages him in his plans and starts complaining about his job and that he actually has what he always wanted but that it doesn't mean something and that he feels lonely. Near the end Billy considers asking Bill Oliver for financial support but is uncertain because he is afraid Bill will remember that he stole some basketballs from him as a teenager. Happy tells him to think optimistic. The scene ends with Biff and Happy overhearing Willy while he is fading away into his flashback.

On page 18 lines 15 f. Biff uses an enumeration to emphasize how many jobs he already had “Shipping clerk, salesman, business of one kind or another.” On the same page line 16-19 he uses an anaphora “To get on that subway […] To devote […] To suffer fifty weeks” to dramatize his situation. In line 27-33, still on page 18 Biff employs two rhetorical questions and again an enumeration “In Nebraska […], and the Dakotas, and Arizona, and now in Texas” “it's spring there now, see? […] it's cool there now see?” he wants to include Happy to his problems and wants to create a feeling of “wholeness”. On page 19 line 10 f. Biff wants to show Happy how important these things are to him “I'm like a boy. I'm not married. I'm not in business. I just – I'm like a boy.” ..... Kaufen Sie jetzt Zugang, um mehr zu lesen Schon registriert als Abonnent? Bitte einloggen