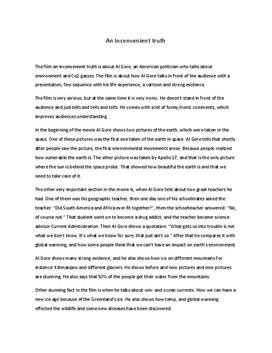 The film an inconvenient truth is about Al Gore, an American politician who talks about environment and Co2 gasses. The film is about how Al Gore talks in front of the audience with a presentation, few sequence with his life experience, a cartoon and strong evidence.
The film is very serious, but at the same time it is very ironic. He doesn’t stand in front of the audience and just tells and tells and tells. He comes with a lot of funny/ironic comments, which improves audiences understanding... Kaufen Sie jetzt Zugang, um mehr zu lesen Schon registriert als Abonnent? Bitte einloggen