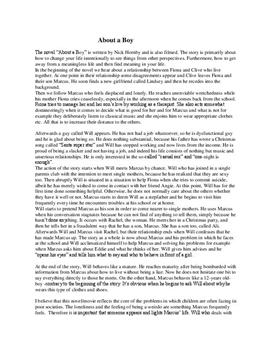 About a Boy Zusammenfassung

In the beginning of the novel we hear about a relationship between Fiona and Clive who live together. At one point in their relationship some disagreements appear and Clive leaves Fiona and their son Marcus. He soon finds a new girlfriend called Lindsey and then he recedes into the background.
Then we follow Marcus who feels displaced and lonely. He reaches unenviable wretchedness while his mother Fiona cries ceaselessly, especially in the afternoon when he comes back from the school. Fiona tries to manage her and her son’s live by working as a therapist. She also acts somewhat domineeringly when it comes to decide what is good for her and for Marcus and what is not for example they deliberately listen to classical music and she enjoins him to wear appropriate clothes etc. All that is to increase their distance to the others... Kaufen Sie jetzt Zugang, um mehr zu lesen Schon registriert als Abonnent? Bitte einloggen