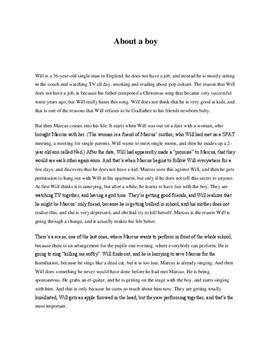 Will is a 36-year-old single man in England, he does not have a job, and instead he is mostly sitting in the couch and watching TV all day, smoking and reading about pop culture. The reason that Will does not have a job, is because his father composed a Christmas song that became very successful some years ago, but Will really hates this song. Will does not think that he is very good at kids, and that is one of the reasons that Will refuses to be Godfather to his friends newborn baby... Kaufen Sie jetzt Zugang, um mehr zu lesen Schon registriert als Abonnent? Bitte einloggen