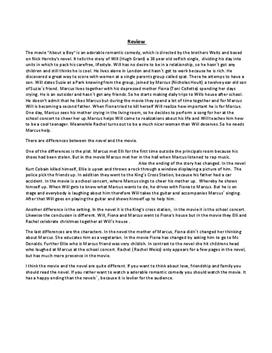 The movie "About a Boy" is an adorable romantic comedy, which is directed by the brothers Weitz and based on Nick Hornby's novel. It tells the story of Will (Hugh Grant) a 38 year old selfish single, dividing his day into units in which to pack his carefree, lifestyle. Will has no desire to be in a relationship, so he hasn´t got any children and still thinks he is cool. He lives alone in London and hasn´t got to work because he is rich. He discovered a great way to score with women at a single parents group called spat. There he attemps to have a son. Will dates Suzie at a Park knowing from the group, joined by Marcus (Nicholas Hoult) a twelve year old son of Suzie´s friend. Marcus lives together with his depressed mother Fiona (Toni Collette) spending her days crying. He is an outsider and hasn´t got any friends. So he starts making daily trips to Wills house after school. He doesn't admit that he likes Marcus but during the movie they spend a lot of time together and for Marcus Will is becoming a second father. When Fiona tried to kill herself Will realize how important he is for Marcus. One day, Marcus sees his mother crying in the living room, so he decides to perform a song for her at the school concert to cheer her up.Marcus helps Will come to realizations about his life and Will teaches him how to be a cool teenager. Meanwhile Rachel turns out to be a much nicer woman than Will deserves. So he needs Marcus help.

There are differences between the novel and the movie.

One of the differences is the pIot. Marcus met Elli for the first time outside the principals room because his shoes had been stolen. But in the movie Marcus met her in the hall when Marcus listened to rap music. Also the ending of the story has changed. In the novel Kurt Cobain killed himself, Ellie is upset and throws a rock through a window displaying a picture of him. The police pick the friends up. In addition they went to the King´s Cross Station, because his father had a car accident. In the movie is a school concert, where Marcus sings to cheer his mother up. Whereby he shows himself up. When Will gets to know what Marcus wants to do, he drives with Fiona to Marcus. But he is on stage and everybody is laughing about him therefore Will takes the guitar and accompanies Marcus´ singing. After that Will goes on playing the guitar and shows himself up to help him.... Kaufen Sie jetzt Zugang, um mehr zu lesen Schon registriert als Abonnent? Bitte einloggen