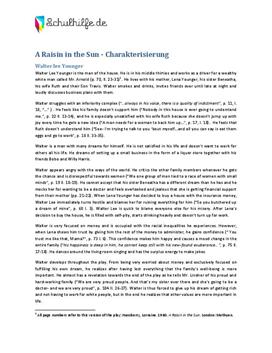 A Raisin in the Sun Charakterisierung Walter Lee Younger

Walter lee Younger
Walter Lee Younger is the man of the house. He is in his middle thirties and works as a driver for a wealthy white man called Mr. Arnold (p. 70, ll. 23-31) . He lives with his mother, Lena Younger, his sister Beneatha, his wife Ruth and their Son Travis. Walter smokes and drinks, invites friends over until late at night and loudly discusses business plans with them.
Walter struggles with an inferiority complex (“…always in his voice, there is a quality of indictment”, p. 11, l. 18, “…” ) . He feels like his family doesn't support him (“Nobody in this house is ever going to understand me.”, p. 22 ll. 13-14), and he is especially unsatisfied with his wife Ruth because she doesn't jump up with joy every time he gets a new idea... Kaufen Sie jetzt Zugang, um mehr zu lesen Schon registriert als Abonnent? Bitte einloggen