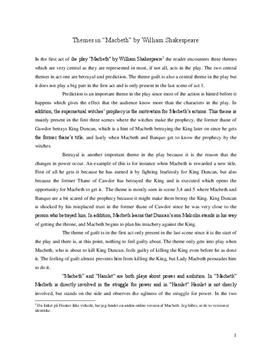 Themes in "Macbeth" by William Shakespeare

In the first act of the play ”Macbeth” by William Shakespeare the reader encounters three themes which are very central as they are represented in most, if not all, acts in the play. The two central themes in act one are betrayal and prediction. The theme guilt is also a central theme in the play but it does not play a big part in the first act and is only present in the last scene of act 1.

Prediction is an important theme in the play since most of the action is hinted before it happens which gives the effect that the audience know more than the characters in the play. In addition, the supernatural witches’ prophecy is the motivation for Macbeth’s actions. This theme is mainly present in the first three scenes where the witches make the prophecy, the former thane of Gawdor betrays King Duncan, which is a hint of Macbeth betraying the King later on since he gets the former thane’s title, and lastly when Macbeth and Banquo get to know the prophecy by the witches... Kaufen Sie jetzt Zugang, um mehr zu lesen Schon registriert als Abonnent? Bitte einloggen