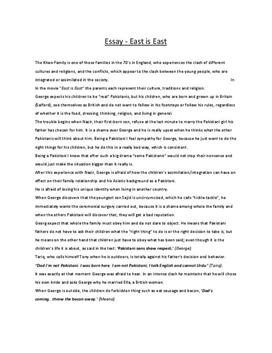 The Khan-Family is one of those families in the 70's in England, who experiences the clash of different cultures and religions, and the conflicts, which appear to the clash between the young people, who are integrated or assimilated in the society.

In the movie ”East is East” the parents each represent their culture, traditions and religion. George expects his children to be “real” Pakistanis, but his children, who are born and grown up in Britain (Salford), see themselves as British and do not want to follow in his footsteps or follow his rules, regardless of whether it is the food, dressing, thinking, religion, and living in general... Kaufen Sie jetzt Zugang, um mehr zu lesen Schon registriert als Abonnent? Bitte einloggen