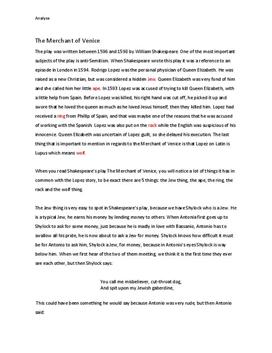 The Merchant of Venice

The play was written between 1596 and 1598 by William Shakespeare. One of the most important subjects of the play is anti-Semitism. When Shakespeare wrote this play it was a reference to an episode in London in 1594. Rodrigo Lopez was the personal physician of Queen Elizabeth. He was raised as a new Christian, but was considered a hidden Jew. Queen Elizabeth was very fond of him and she called him her little ape. In 1593 Lopez was accused of trying to kill Queen Elizabeth, with a little help from Spain. Before Lopez was killed, his right hand was cut off, he picked it up and swore that he loved the queen as much as he loved Jesus himself, then they killed him. Lopez had received a ring from Phillip of Spain, and that was maybe one of the reasons that he was accused of working with the Spanish. Lopez was also put on the rack while the English was suspicious of his innocence. Queen Elizabeth was uncertain of Lopez guilt, so she delayed his execution. The last thing that is important to mention in regards to the Merchant of Venice is that Lopez on Latin is Lupus which means wolf... Kaufen Sie jetzt Zugang, um mehr zu lesen Schon registriert als Abonnent? Bitte einloggen