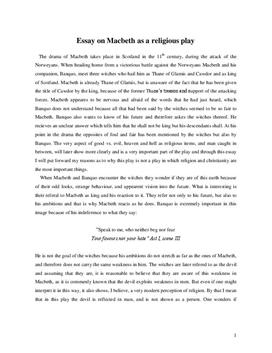 Essay on Macbeth as a religious play

The drama of Macbeth takes place in Scotland in the 11th century, during the attack of the Norweyans. When heading home from a victorious battle against the Norweyans Macbeth and his companion, Banquo, meet three witches who hail him as Thane of Glamis and Cawdor and as king of Scotland. Macbeth is already Thane of Glamis, but is unaware of the fact that he has been given the title of Cawdor by the king, because of the former Thane’s treason and support of the attacking forces.

Macbeth appeares to be nervous and afraid of the words that he had just heard, which Banquo does not understand because all that had been said by the witches seemed to be so fair to Macbeth. Banquo also wants to know of his future and therefore askes the witches thereof. He recieves an unclear answer which tells him that he shall not be king but his descendants shall. At his point in the drama the opposites of foul and fair has been mentioned by the witches but also by Banquo. The very aspect of good vs. evil, heaven and hell as religious items, and man caught in between, will later show more clearly and is a very important part of the play and through this essay I will put forward my reasons as to why this play is not a play in which religion and christianity are the most important things.

When Macbeth and Banquo encounter the witches they wonder if they are of this earth because of their odd looks, strange behaviour, and appearent vision into the future. What is interesting is their referal to Macbeth as king and his reaction to it. They refer not only to his future, but also to his ambitions and that is why Macbeth reacts as he does. Banquo is extremely important in this image because of his indeference to what they say:... Kaufen Sie jetzt Zugang, um mehr zu lesen Schon registriert als Abonnent? Bitte einloggen