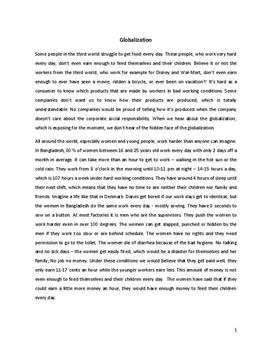 Some people in the third world struggle to get food every day. These people, who work very hard every day, don’t even earn enough to feed themselves and their children. Believe it or not the workers from the third world, who work for example for Disney and Wal-Mart, don’t even earn enough to ever have seen a movie, ridden a bicycle, or ever been on vacation?!

It’s hard as a consumer to know which products that are made by workers in bad working conditions. Some companies don’t want us to know how their products are produced, which is totally understandable. No companies would be proud of telling how it’s produced when the company doesn’t care about the corporate social responsibility. When we hear about the globalization, which is exposing for the moment, we don’t hear of the hidden face of the globalization.

All around the world, especially women and young people, work harder than anyone can imagine. In Bangladesh, 80 % of women between 16 and 25 years old work every day with only 2 days off a month in average. It can take more than an hour to get to work – walking in the hot sun or the cold rain... Kaufen Sie jetzt Zugang, um mehr zu lesen Schon registriert als Abonnent? Bitte einloggen