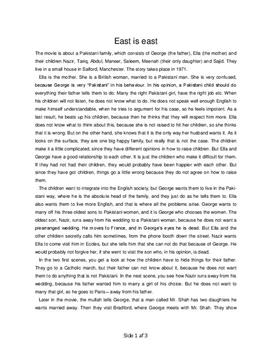 The movie is about a Pakistani family, which consists of George (the father), Ella (the mother) and their children Nazir, Tariq, Abdul, Maneer, Saleem, Meenah (their only daughter) and Sajid. They live in a small house in Salford, Manchester. The story takes place in 1971.

Ella is the mother. She is a British woman, married to a Pakistani man. She is very confused, because George is very “Pakistani” in his behaviour. In his opinion, a Pakistani child should do everything their father tells them to do: Marry the right Pakistani girl, have the right job etc. When his children will not listen, he does not know what to do. He does not speak well enough English to make himself understandable, when he tries to argument for his case, so he feels impotent. As a last result, he beats up his children, because then he thinks that they will respect him more. Ella does not know what to think about this, because she is not raised to hit her children, so she thinks that it is wrong... Kaufen Sie jetzt Zugang, um mehr zu lesen Schon registriert als Abonnent? Bitte einloggen