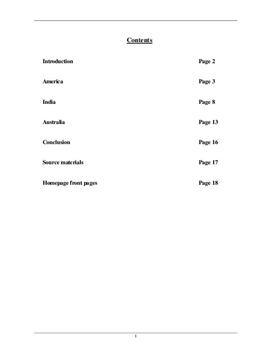 Already in the 13th century England conquered its first countries Scotland and Wales and made them colonies of England, because England was overpopulated. It was the beginning of the great English empire which really started in the 16th century, when England conquered North America and India, and ended after the Second World War, when America called for non colonisation in other countries in the world.
In the 17th and the 18th century Britain was the greatest colonial empire with colonies around the world, actually the British Empire was four times bigger than the Roman Empire. The English and the Roman Empire were a little like the same; both the Roman and the English empires preferred to rule the colonies from home and non of them made new rules in the colonies or told the colonies what to do, they just ruled the countries.

Britain was overpopulated, and because of this the trade routes were very important for the British Empire, because food and raw materials were cheap in other countries, and Britain needed food for its many people. The British Empire arose historically because of business interests. Britain had harbours and naval stations in many countries around the world, and they slowly began to take over the trade market and got monopoly on articles from their colonies.

We have chosen to write about three of Britain's biggest colonies: India, America and Australia with main emphasis on the colonisation, rebellions and the decolonization, and why England had interests in countries so far away from England... Kaufen Sie jetzt Zugang, um mehr zu lesen Schon registriert als Abonnent? Bitte einloggen